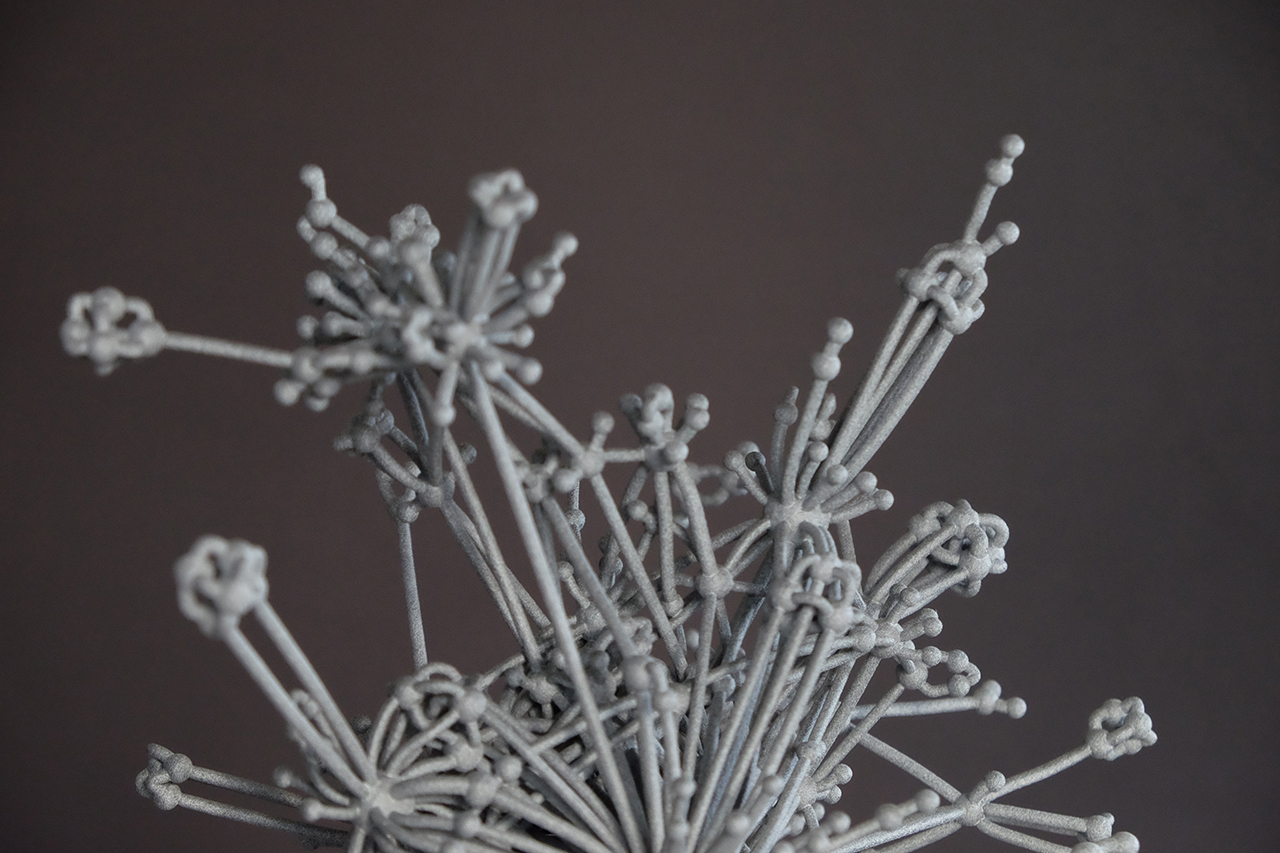 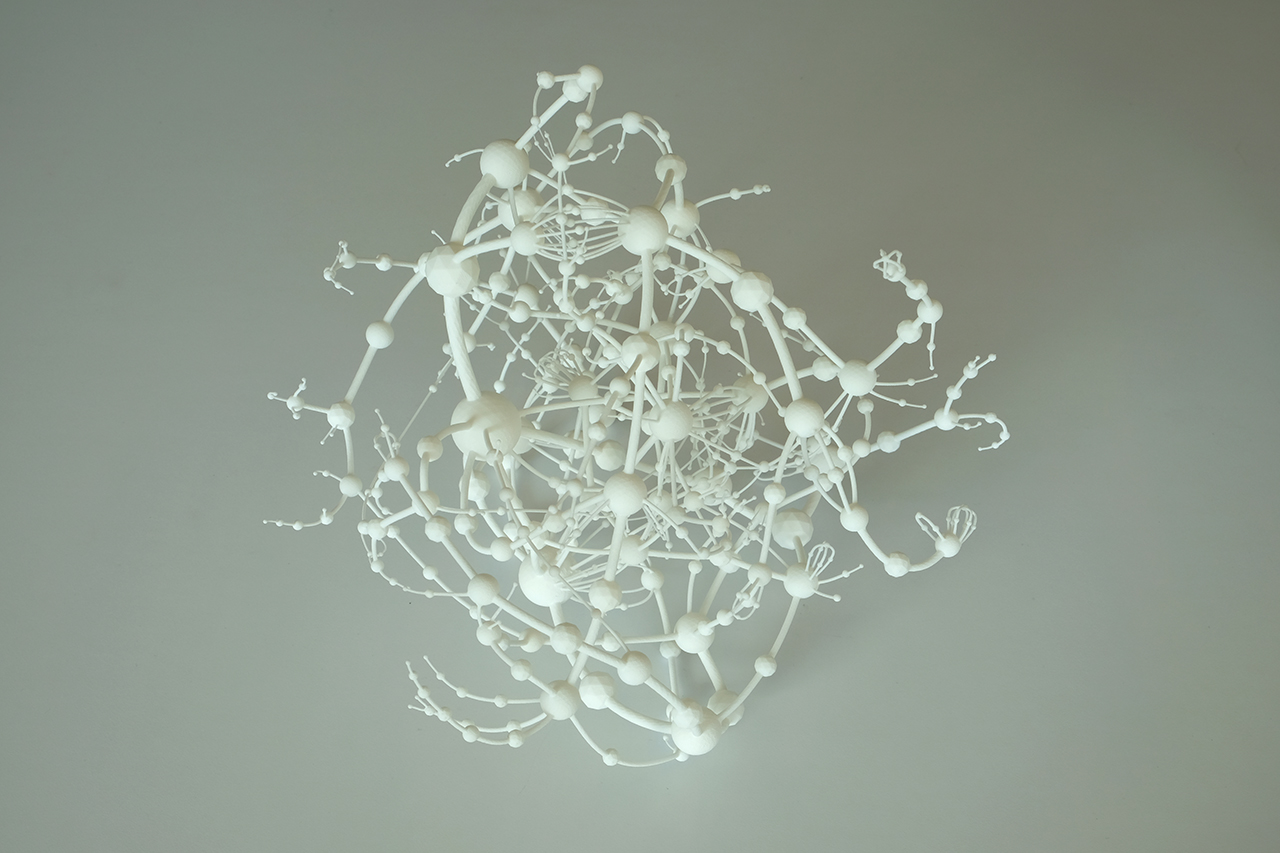 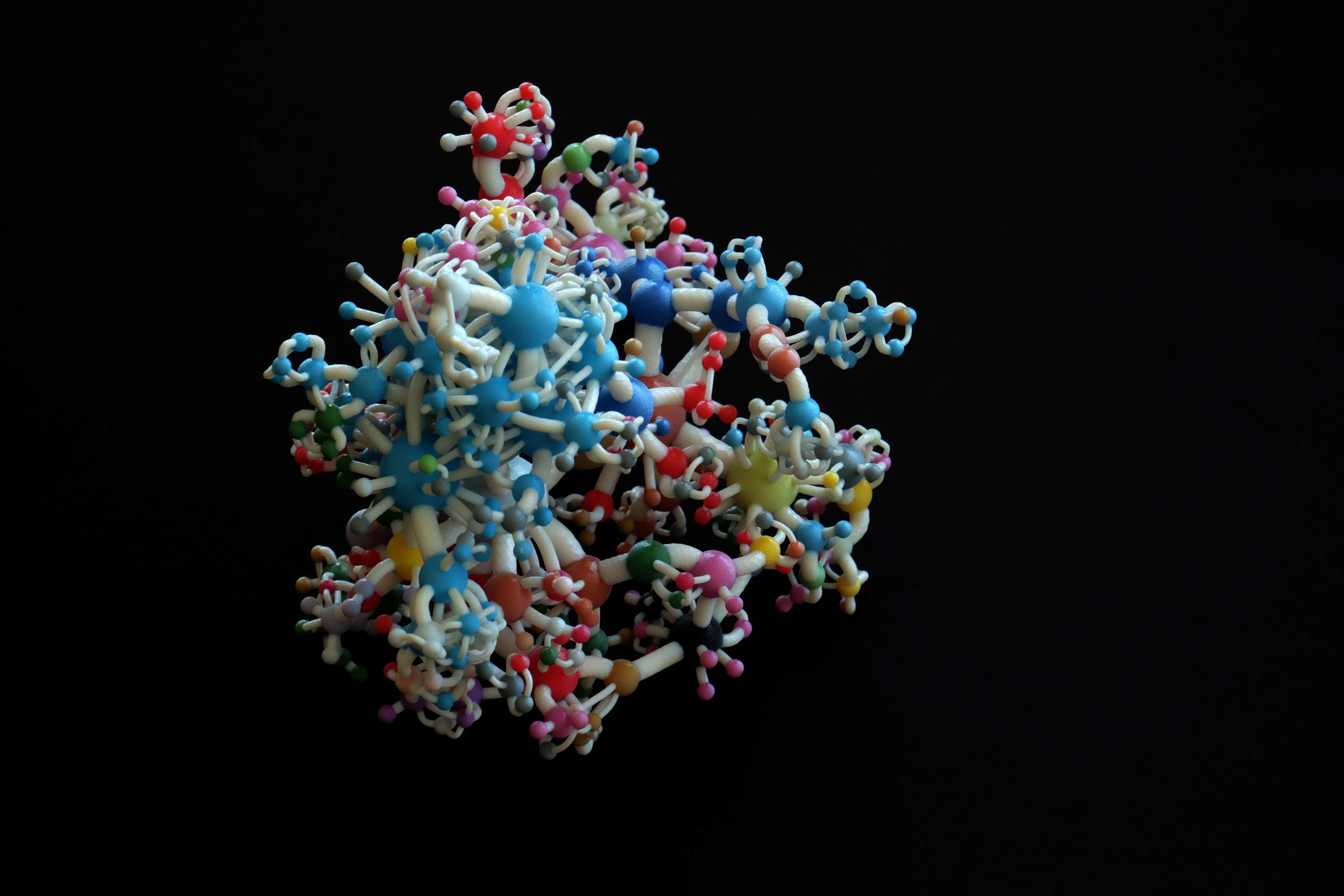 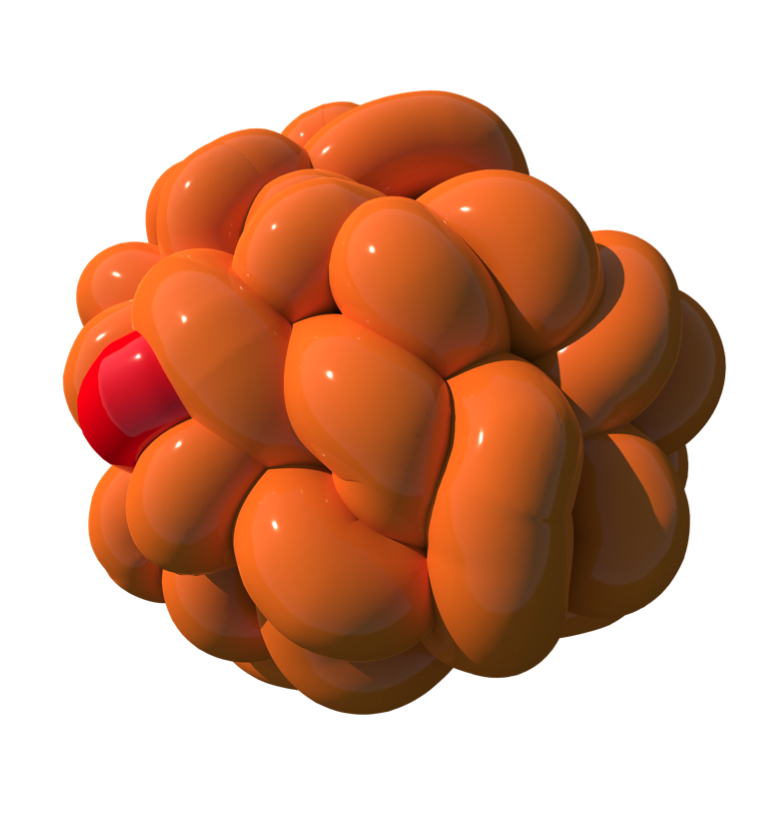 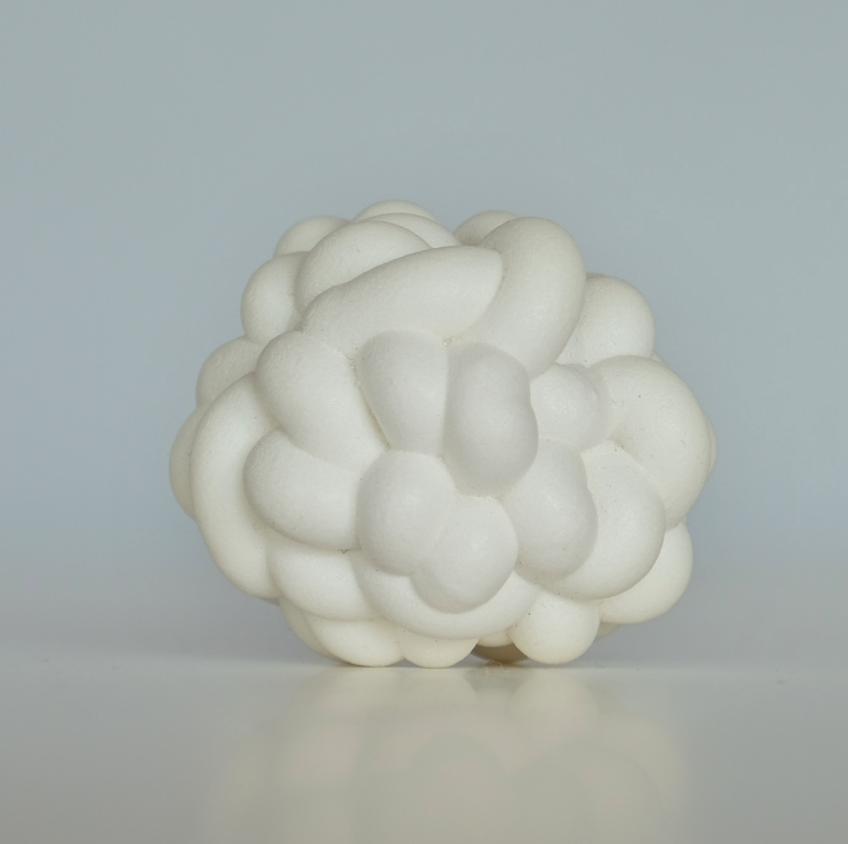 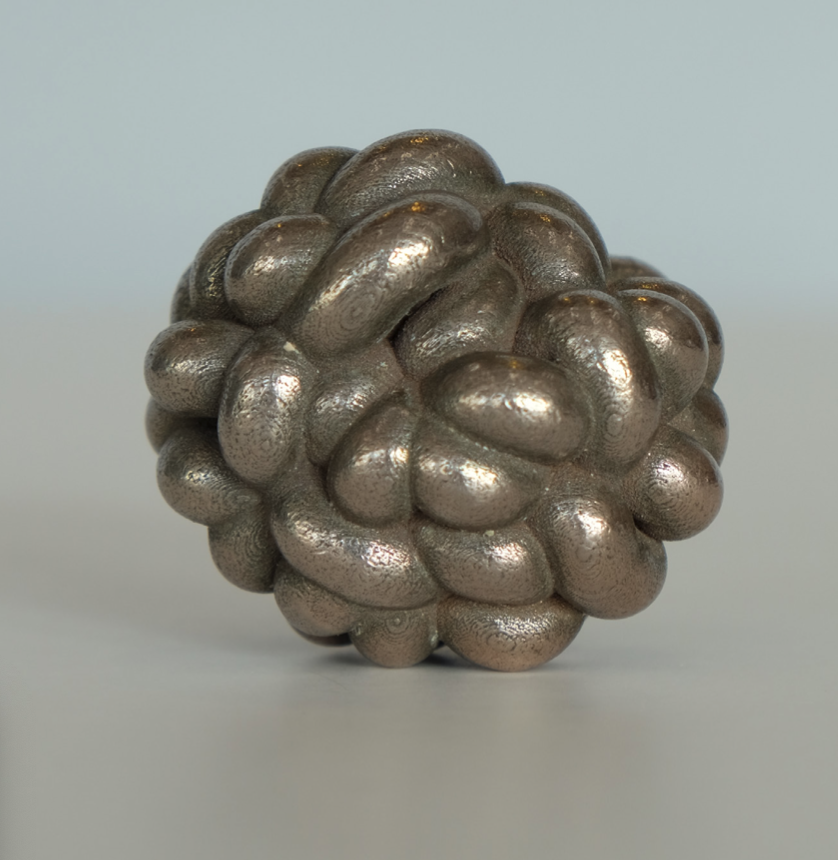 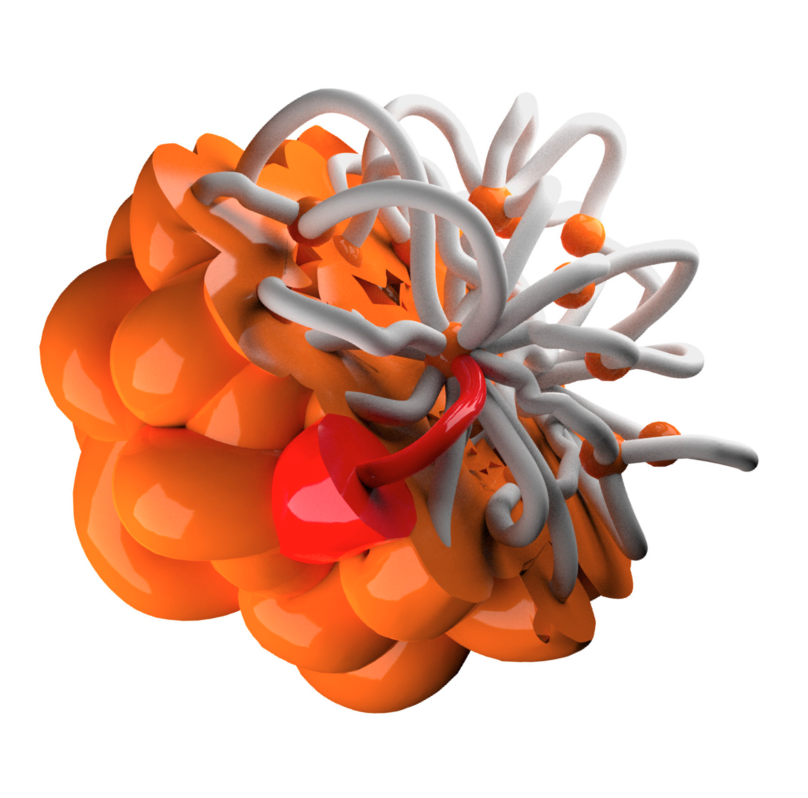 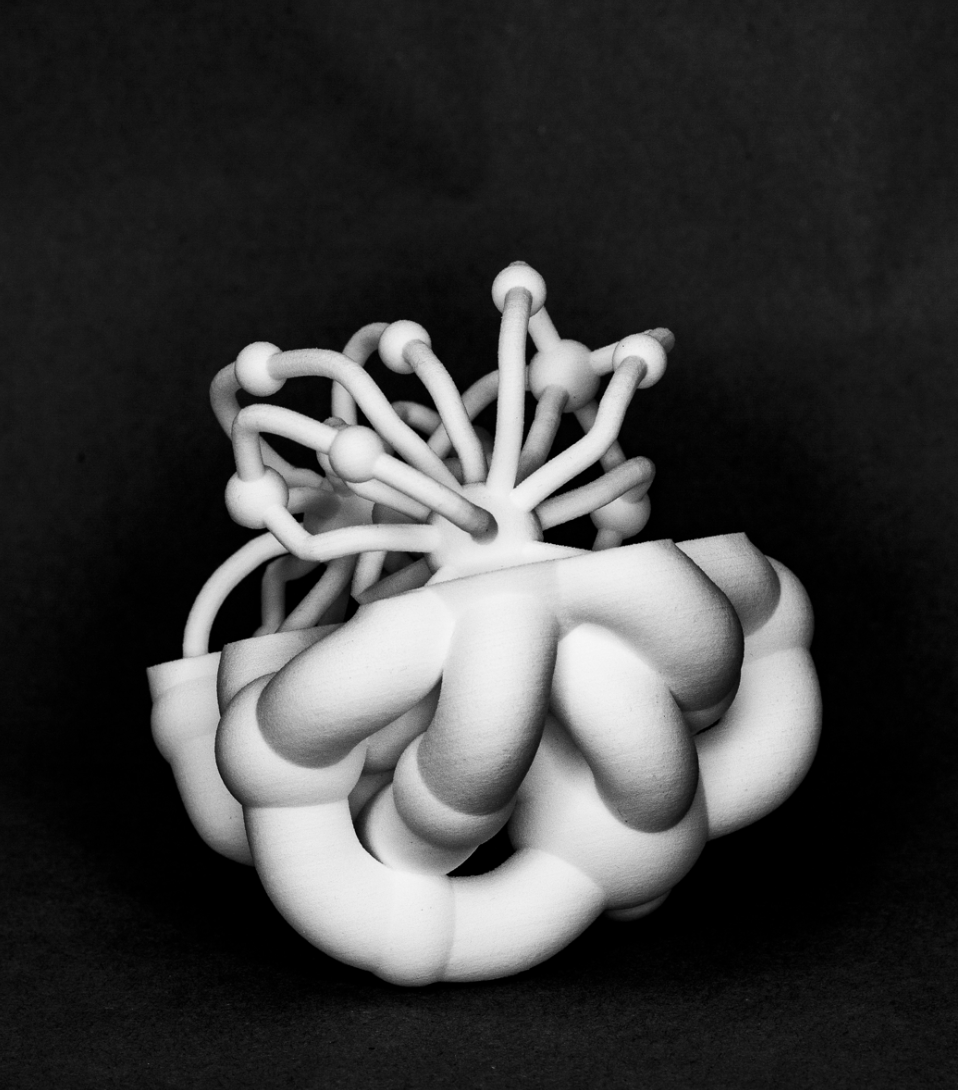 For years, Barabási had been exasperated by the fact that network visualization seemed to be stuck in two dimensions. But, in 2017, just as he was reaching peak frustration, the emergence of accessible 3-D printing gave him the opportunity to get closer to his dream of giving sculptural form to his visualizations.

The Flavor Network as a 3-D data sculpture, by A.-L. Barabási, A. Grishchenko, N. Dehmami, and S. Milanlouei, as published in “A Structural Transition in Physical Networks,” Nature (November 28, 2018)
Photograph by Alice Grishchenko

First, though, there was the hurdle of creating software that would suit his needs. The existing network-layout algorithms perceived the links as virtual and bodyless objects, which meant they were allowed to cross each other. Such crossings not only violate the viewer’s sense of physicality, they are forbidden in many physical networks, such as the brain, where the neurons avoid other neurons, except when they synapse together. The BarabásiLab developed a new mathematical and algorithmic framework inspired by actual physical and biological patterns for laying out networks in three dimensions without link-crossings. This software, combined with the newly emerging powder printing, a technology that allows for the printing of intricate data sculptures, enabled the Barabási to turn 3-D printing into the lab’s medium of choice.

Barabási began by testing his 3-D network-layout methodology on The Flavor Network, which encodes how ingredients in our food connect to one another through shared flavor chemicals and was originally mapped and published in 2011. In contrast with the colorful 2-D map, this initial 3-D map was monochromatic. Color 3-D powder printing was not ready yet. But even in a single solid hue, this sculptural diagram presents a clear separation of the different flavor communities and unveils previously hidden relationships between groups of foods.

The next 3-D visualization challenge the BarabásiLab took on was to represent the very real obstructions that occur in dense networks. If links are sufficiently thick, the paths connecting the nodes are often obstructed, forcing the links to follow convoluted routes to their destination. Such curving can be extreme, so extreme that very dense physical networks enter a new phase of their existence—this process happens in much the same way that cooling water freezes into a rigid organization that we perceive as ice. Barabási produced a series of 3-D scultpures to represent this dense bundling condition. He called them Gurgas, the Latin word for “gorge,” because their twisting, interweaving form resembles constrained water as it struggles to find an outlet in the landscape. Thanks to their compact shape and absence of loose links, these Gurgas became the lab’s testing ground for new 3-D printing materials, such as bronze and plastic.